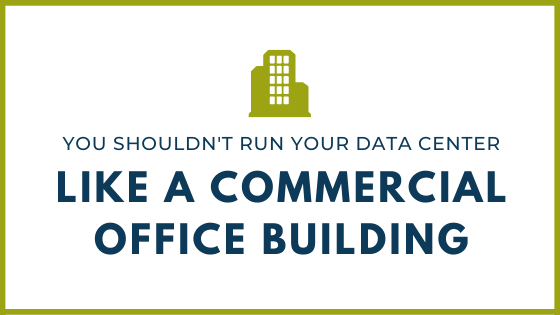 Cooling systems are key to the ongoing operation of data centers. As more reliance is placed on data centers to perform day to day functions, such as social media, eCommerce, and a vast array of information services, the uninterrupted operation of data centers is increasingly important. Today’s servers have become more robust, operating safely in a wide range of temperature and humidity conditions, but even these robust servers have limits. If the thermal conditions in a data center exceed those wide parameters, especially the upper-temperature boundaries, the server can shut down.

So, how are the proper temperature and humidity conditions maintained? All cooling systems have “set points,” which determine how the cooling system works.

Home and commercial building cooling systems provide cool air through ductwork and draws the warm air out of the space. In a home air conditioning unit, known as a split system, the compressor, or the part of the unit outside the home, condenses and circulates the refrigerant through the outdoor unit, changing it from a gas to a liquid. The liquid is then forced through the cooling compartment of the furnace. The indoor unit’s fan circulates the inside air to pass across the evaporator fins. The evaporator’s metal fins exchange the thermal energy with the air around it. There, the refrigerant turns from liquid into vapor, removing any heat from the surrounding air. As the heat is removed from the air, the air is cooled and blown back into the house.

From that point, the condenser or outdoor unit then turns the refrigerant vapor back into a liquid, removing any heat. By the time the fluid leaves the evaporator again, it is a cool, low-pressure gas. The gas will then return to the condenser to begin its trip all over again. This process continues until the set point temperature you programmed is reached.

If your thermostat is set at 22°C (70°F), for example, it means the air conditioning system will operate until that temperature is attained or slightly exceeded, and then the system shuts down. Generally, there is a “dead band”  during which the home begins to heat up again while the system is off. Most thermostats have a predetermined value for the dead band. So, let’s say the dead band is 2°C. As the temperature in the house begins to increase and the thermostat reaches 24°C (75°F), the cooling system will reactivate, providing cool air until the set point is reached and then the unit shuts off.

In the summer months, the HVAC operates in cooling mode and in the colder winter months, they operate in heating mode. Data center cooling systems do not require a heating mode of operation, except in cases of very small and extremely low heat load facility, such as a hut in the colder winter months. Data centers should be controlled to meet the cooling and airflow needs of its main occupants – the IT equipment. And this is where the difference between commercial HVAC systems and data center cooling systems begin. In summer months, commercial buildings operate in air conditioning mode to remove the heat and humidity to create a comfortable space for the occupants.

So, what is the heat load in an office building? That depends on the size of the space, square footage, and the number of occupants, related equipment such as computers and the quality of the building envelope.

The human body generates about 350,000 joules of energy per hour. Since a watt is just joules per second, this would be roughly equal to energy (heat) given off by a 100 watt light bulb each hour.

For an office building, the general rule of thumb is to allow anywhere between 125 and 225 usable square feet of office space per person. In a 10,000 square foot office space, assuming a totally open concept with no walls, hallways, or common areas, this space would allow a range of between 50 and 80 people. Since each occupant generates roughly 100 watts of heat, this, in turn, would create a total heat load of between 5,000 and 8,000 watts (5kW to 8kW) of heat or about  0.5 to 0.8 watt/square foot heat load. If this space were to be used for other purposes, the amount of space allotted per occupant would change, as would the level of heat generated by each occupant.

The amount of heat generation should also include direct heat from the sun through windows and through the building envelope. Other sources of heat generation in the office include lights and the heat given off by desktop computers or other office equipment. The additional heat load sources would be at least equal to, or more likely greater than, the heat generated by occupants.

The human body also generates moisture through breathing and perspiration, even in a more sedentary mode, such as sitting at a desk. To determine how much moisture a human adds to a space, a number of factors need to be considered, including the environmental conditions, clothing, and level of activity.

A typical level of moisture generated per person per day is about 1.25 litres. Assuming this creation of moisture is evenly spread throughout the day, the level of moisture generated during an 8–hour day in the office would be about 0.4 litres. Taking into account an occupancy of between 50 to 80 people in the 10,000 square foot space, the total moisture created in the space would be between 20 to 32 litres. Retaining a portion of this moisture in the space is required to ensure an acceptable level of relative humidity exists, but a significant amount would need to be removed.  Office equipment and the thermal heat due to the sun do not generate moisture.

HVAC cooling systems in buildings with human occupation, therefore, have to take into account both the heat and moisture being generated by the occupants.

Human comfort in a building is determined by both the temperature and the level of amount of moisture in the air or relative humidity (RH). During the warmer summer months, RH levels tend to be higher (in most parts of the country), and so HVAC systems must use some of their cooling capacity to remove this moisture. In technical terms, a building HVAC has to deal with both sensible heat and latent heat, which are defined as:

Older generations of cooling systems for data centers were spin-offs of commercial systems and were rated the same, based on sensible and latent cooling capacity, as commercial building units. This was because data centers previously had occupants, and both sensible and latent cooling was required. In the early days of data center operation, it was very common to have permanent offices and desks set up in the data center. Large printers were also common to output the created material for sharing and review. The paper, which is quite susceptible to humidity, meant the RH levels had to be kept in a very tight range to prevent printers from jamming. Hence the need to establish tightly controlled temperatures and humidity levels.

The evolution of data centers has seen mainframes replaced by servers, data output communicated via networks and generated on desktop computers, and the sharing of the data via email or files.  IT equipment generates lots of heat, but it does not generate humidity. In fact, taking the human factor out of data centers has virtually eliminated the need for latent cooling operations altogether.

Data centers today should not have office spaces for humans to work for a number of reasons, including their impact on humidity levels. No personnel should be present other than to do cabling, troubleshooting equipment, install new servers, or resolve other issues. Many data centers operate on a ‘lights out’ scenario where human occupancy is extremely low except in maintenance or emergency operations.

The sensible heat generated by today’s IT equipment is very intense, of a high density, and typically continues 24 hours a day. The operating conditions of commercial facilities do not compare to that of data centers. Consequently, the approach to cooling is drastically different.

Sign up to receive email updates about new announcements, educational resources, and more.

This site uses cookies. By continuing to browse the site, you are agreeing to our use of cookies.

We may request cookies to be set on your device. We use cookies to let us know when you visit our websites, how you interact with us, to enrich your user experience, and to customize your relationship with our website.

Click on the different category headings to find out more. You can also change some of your preferences. Note that blocking some types of cookies may impact your experience on our websites and the services we are able to offer.

These cookies are strictly necessary to provide you with services available through our website and to use some of its features.

Because these cookies are strictly necessary to deliver the website, refuseing them will have impact how our site functions. You always can block or delete cookies by changing your browser settings and force blocking all cookies on this website. But this will always prompt you to accept/refuse cookies when revisiting our site.

We fully respect if you want to refuse cookies but to avoid asking you again and again kindly allow us to store a cookie for that. You are free to opt out any time or opt in for other cookies to get a better experience. If you refuse cookies we will remove all set cookies in our domain.

We provide you with a list of stored cookies on your computer in our domain so you can check what we stored. Due to security reasons we are not able to show or modify cookies from other domains. You can check these in your browser security settings.

These cookies collect information that is used either in aggregate form to help us understand how our website is being used or how effective our marketing campaigns are, or to help us customize our website and application for you in order to enhance your experience.

If you do not want that we track your visit to our site you can disable tracking in your browser here:

We also use different external services like Google Webfonts, Google Maps, and external Video providers. Since these providers may collect personal data like your IP address we allow you to block them here. Please be aware that this might heavily reduce the functionality and appearance of our site. Changes will take effect once you reload the page.